Who's Who in Black Los Angeles 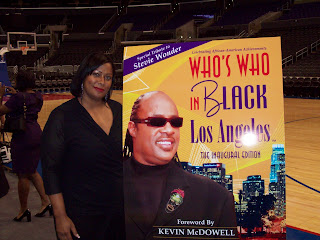 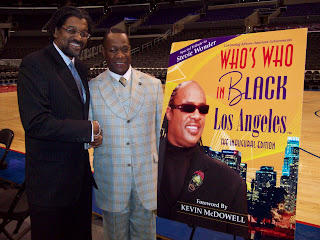 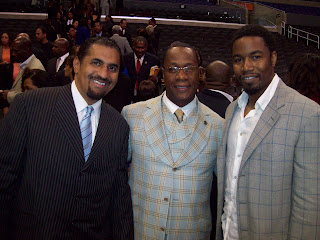 Scenes from the unveiling:  right - Dr. Anthony Asadullah Samad congratulates honoree Student Minister Tony Muhammad.
At far right, award-winning, international photo-journalist Monica Morgan
Right - KJLH Program Director Aundrae Russell, Bro. Tony Muhammad and actor Michael Jai White ("Why Did I Get Married," "The Dark Knight")
Hundreds of black men and women achievers in Los Angeles gathered inside the Staples Center tonight, not to see the L.A. Lakers play, though none would have complained if they were.  They sacrificed their weeknight to participate in the unveiling of a new publication, which presents a collective presence of African American influence in Los Angeles and celebrates their achievements.  Creators, sponsors and supporters of the Who's Who in Black Los Angeles Inaugural Edition gathered at center court for the event, which was moderated by KJLH Radio Program Director Aundrae Russell.
Who's Who in Black Los Angeles was founded by C. Sunny Martin, CEO, Who's Who Publishing Co., LLC and Associate Publisher for the L.A. edition is Dr. Anthony Asadullah Samad.
Nation of Islam Western Region Student Minister Tony Muhammad, Pastor Lewis Logan (Bethel AME Church), Karen Slade (KJLH General Manager) and Charisse Bremond-Weaver (President & CEO, Brotherhood Crusade), were among those honored.
Announcements of the unveiling began when I was on travel status, however, award-winning photojournalist and friend, Monica Morgan (Publisher of Who's Who in Detroit), invited me as her guest when we met up at the Salaam Restaurant in Chicago, IL following the Honorable Minister Louis Farrakhan's Day of Atonement address, "A New Beginning."
Thanks a million, Monica!
Posted by Charlene Muhammad at 11:29 PM No comments: 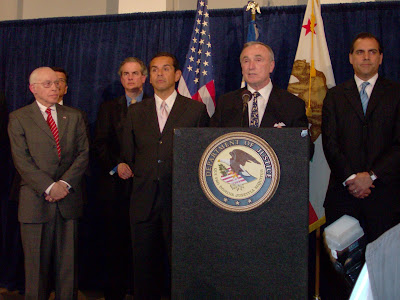 Chief William Bratton (podium) flanked by (l-r) U.S. Attorney General Michael Mukasey, L.A. Mayor Antonio Villaraigosa and District Attorney Rocky Delgadillo at a recent press conference announcing federal funding for gang intervention and suppression.  (photo by Charlene Muhammad)
Los Angeles Police Department Chief William Bratton stated recently that Osama Bin Laden and his followers could be preparing an attack to disrupt or influence the Nov. 4 elections.
News pundits have jumped all over the story, believing this could be the big October surprise that would change the direction of the 2008 presidential elections, which so far places Senator Barack Obama with a slight lead.  Some reporters are speculating that Chief Bratton's opinion is part of the Republican Party's campaign strategy to boost Senator John McCain's poll standings.
Here's a fact:  the ACLU of Southern California released a study this week that shows Blacks and Latinos are stopped, searched, frisked and arrested disproportionately by the LAPD.  The report states that the evidence does not show for certain that the profiling is based on race, still, the ethnicities of the victims tell the tale.
All eyes are on Senators Obama, McCain, their wives and the governor, but beneath the surface of the mainstream news media, there's a lot at stake on statewide and local levels.  Let's keep our eyes and ears open for any news that would fade away in the shadows of the elections.
What's happening in your neighborhood?  The Final Call wants to know.
Peace, Sis Charlene
fcnwest@yahoo.com
fcnprod@aol.com
Posted by Charlene Muhammad at 2:24 PM No comments:

As Salaam Alaikum!
Your immaculate National Center - Just look at her!!!!!
By the time my plane left for Chicago on Wednesday morning, I'd worked up so much anticipation, anxiety and then excitement over the Honorable Minister Louis Farrakhan's address commemorating the 13th Anniversary of the Million Man March that I slept the entire flight.  That fatigue is history - wiped away by the energetic spirits of the believers at the Nation of Islam's Headquarters.
They've been working very hard to ensure that everyone has a peaceful, pleasant experience.
Min. Farrakhan addresses inmates at the Cook County Jail, Oct. 16 (photos by Kenneth Muhammad).  Final Call Assistant Editor Ashahed Muhammad details the visit in our next issue...don't miss it. 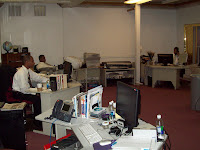 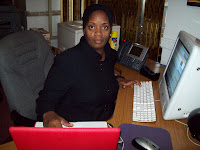 Well, back to work on Mind, Matter, Movement!
Peace and Blessings,
Sis. Charlene
Posted by Charlene Muhammad at 3:45 PM 4 comments:

Mind, Matter, Movement
Cedric Muhammad of CM Cap (http://www.cmcap.com) is a successful entrepreneur, economist, and political strategist, among other things.  I interviewed him recently for a Final Call article on the economy, finances and how people can endure and ultimately move forward.
Charlene Muhammad:  We saw recently that the U.S. National debt clock ran out of figures to record its massive debt.  How are people wrapping their minds around this from your perspective?
Cedric Muhammad:  I see people as being in shock, disbelief and denial.  It shows in their moods, and in the fact that they still largely place their hopes in an economic and political system that is on its way down.  It is somewhat like a person who watches a car accident on the side of the road at the exact time that they should be driving more carefully.  Because our political leaders and the general public are relatively financially illiterate, and economics is hardly taught in high school, we have not been prepared for what is happening.  So, we see ourselves as victims and helpless bystanders rather than tangible factors of change.
Charlene Muhammad:  What do you think about reports that the Bush Administration is considering buying stakes in some of the major banks?  What does this mean given his administration's role in this whole economic failure?
Cedric Muhammad:  Something like this happened in the country of Chile years ago, where the banks were eventually sold back into private hands afterward, and it reminds me slightly of the Resolution Trust Corporation set up to handle the Savings and Loan crisis in America, but I do not know of something like this in American history where commercial banks are concerned, as proposed.  What is means is that the United States government is becoming the world's largest investor, and using taxpayer dollars to do so.  How the American people share in what their government 'owns' is not clear.  But we have reason to be wary.  For instance, can we really expect the corruption, nepotism and cronyism that exists in government agencies today, which impacts the awarding of government contracts, to not eventually affect decision-making at the banks the government 'owns?'  This could easily affect who gets loans, and on what terms.
Charlene Muhammad:  Thank you.
(Remember to look for more from Cedric Muhammad in the Final Call soon.)
Posted by Charlene Muhammad at 11:35 PM 4 comments: