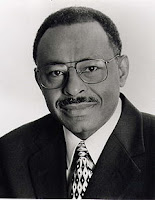 Governor Rod Blagojevich appointed former Illinois Attorney General Roland Burris to fill President-Elect Barack Obama’s Senate seat Tuesday. Senate Majority leader Harry Reid has vowed not to certify Atty. Gen. Burris and Democratic leaders have vowed not to seat him.
A few of the mixed reactions:
President-Elect Barack Obama (as reported by the International Herald Tribune):  "Roland Burris is a good man and a fine public servant, but the Senate Democrats made it clear weeks ago that they cannot accept an appointment made by a governor who is accused of selling this very Senate seat.  I believe the best resolution would be for the Governor to resign his office and allow a lawful and appropriate process of succession to take place."
Senate Majority Leader Harry Reid:  “It is truly regrettable that despite requests from all 50 Democratic Senators and public officials throughout Illinois, Gov. Blagojevich would take the imprudent step of appointing someone to the United States Senate who would serve under a shadow and be plagued by questions of impropriety. We say this without prejudice toward Roland Burris’ ability, and we respect his years of public service. But this is not about Mr. Burris; it is about the integrity of a governor accused of attempting to sell this United States Senate seat. Under these circumstances, anyone appointed by Gov. Blagojevich cannot be an effective representative of the people of Illinois and, as we have said, will not be seated by the Democratic Caucus.

“He (Burris) is the only one I believe that can stand in the gap during these tumultuous times and gather the confidence, reestablish the confidence of the people of the State of Illinois . . . as far as my colleagues in the Congress, we intend to persuade them or to challenge them to do whatever – beg them – whatever it may take to get them to reverse their decision.  Roland Burris stands heads and shoulders against most elected officials in this nation, so there's no rhyme or reason that he should not be seated in the U.S. Senate.

This is a matter of national importance.”

Posted by Charlene Muhammad at 3:44 PM

Since 'they' say that this is a country that is ruled by 'LAW' (their law, NOT the PRINCIPLES of ALMIGHTY GOD), then why should not 'THEIR LAW' have its way now?

It seems as if 'THEIR LAW' is on the side of Blagojevich now, just as it has always been on the side of INJUSTICE all along. I hope and pray that this legal system, which has done so much INJUSTICE to The PEOPLE Of GOD ALMIGHTY, will finally be exposed for what it is -- "WICKEDNESS in high places". Let TRUTH PREVAIL!