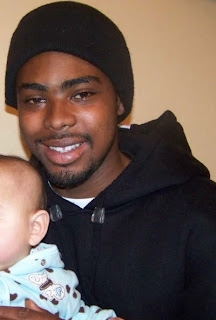 Greetings everyone.  The smiling brother right here is Oscar Grant, III. - the reason the Final Call and the world - at least parts of it - is focused on Oakland, California right now.  He died begging for his life.
I'm still gathering facts and moving about Oakland over the police shooting of Mr. Grant and developments are happening fast.  They're in no particular order.
Oscar Grant, III. has been memorialized and buried, but he is not gone, and certainly not forgotten.  I'm finding out that that brother was an exemplary citizen - father, son, spiritual man, youth mentor, just a good brother, from widespread accounts.
Johannes Mehserle, the 27-year-old former B.A.R.T. officer who killed Mr. Grant, still hasn't come in or been brought in for questioning by police officials.  What?!?  Meanwhile, local news reports indicate that he and his family have received death threats.
Some community activists are helping to establish a fund for Mr. Grant's daughter and family's survival.
Mayor Ron Dellums and the City is helping to to repair the damage caused by rioters to the property of Downtown Oakland merchants.
Police have released at least 70 people of the more than 100 who were arrested during Wednesday night's demonstration.  Only about 3 have actually been charged with crimes.
By the way, the Wednesday morning rally and press conference organized by the Coalition Against Police Executions (born out of Mr. Grant's murder) was peaceful and drew hundreds of people, but after that rally ended  a group of people  began marching downtown to protest and that's what's being widely reported.
Two things are for sure:  1) we all know that if the cell phone videos hadn't captured the incident, there would be no outcry and Mr. Grant would have been just another black man, black life, that was taken under the cover of police brutality, and 2) although the Wednesday evening rebellion shed a negative light on the community's efforts to seek justice, it was the youth's stance that night that forced BART (which took more than a week to engage the community about the incident) and powers that be to address the issue.  At Mayor Dellums' press conference, Alameda County District Attorney Tom Orloff admitted that he simply would not be addressing certain things, but because the community (youth) became engaged the way that they did, he found it necessary to communicate.
Now I'm not advocating violence or saying that destroying others' property is right, but translation:  the youth were so angry that they tore stuff up.  Anyway,  that wasn't the first time Orloff was forced to address the community, though.  Bay Area Student Minister Christopher Muhammad, Oakland Student Minister Keith Muhammad, Councilmember Desley Brooks, and a community coalition sought and gained a meeting with D.A. Orloff to demand answers and status of the investigation.  Many people, and in particular, the Bay Area's Ministerial Alliance, as well as the Millions More Movement, is moving and shaking things up.  Lots of real planning and organizing is taking place.
All of the youth's and community's energy about this brother's death predates him.  The Bay Area and especially youth in Oakland have been under police terrorism for a long time, according to community testimonies.  One man, Robert Hendrix, was so angry, he interrupted Mayor Dellums' press conference and demanded that the D.A. explain what happened to the investigations into the police shootings of eight other black young men who were killed in 2008.
As you can expect, the community has made a list of demands, which include policy changes, from hiring more Black B.A.R.T. officers, to better training.  Some are also using the tragedy of Grant's death to appeal to youth to stop the killing as well. Time for the town hall meeting.

Look for details and analysis of this issue in next week's Final Call Newspaper.  Subscribe at www.finalcall.com, pick it up at a local community spot, or patronize the "Bowties with the Final Calls" as Sis Erykah Badu puts it.
The photos below were taken during the peaceful rally by Bro. Victor Muhammad of VJ London Photography.
Peace and blessings, and please, be safe.
Sis Charlene 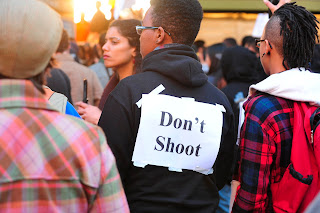 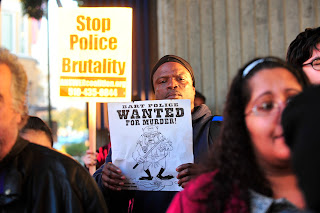 Posted by Charlene Muhammad at 2:07 PM