'The tragedy is that we are invisible'

Blacks in Peru long for role models, self knowledge as they demand opportunity, justice 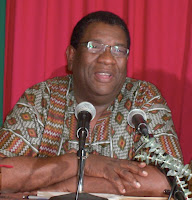