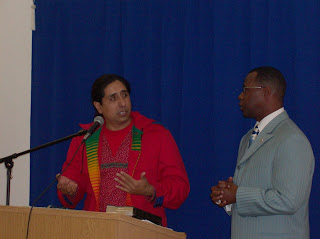 Hector Perez Pacheco is no stranger to the Nation of Islam and Muhammad Mosque #27.  This morning, at Mosque 27, he detailed the relationship between his people and Muslim followers of the Most Honorable Elijah and the Honorable Minister Louis Farrakhan began and invited the Muslims to one of their Sacred Ceremonies:

First, I must thank Min. Tony and Min. Wazir and all of the brothers and sisters that I have been in the presence of for this past 20 years.  Our warrior society, we started within the mosque on Western.  We didn’t have a place to meet.  Min. Wazir opened up the place and said come and meet here.  From that initial meeting on Western, we started establishing ourselves throughout Los Angeles.

I just wanted to thank the Nation of Islam for always being there for us.  Thank you.

Three weeks ago, in Washington, D.C.  The Chiefs from Canada came and asked if we could protect them.  As a warrior society that we are, we went to protect these Chiefs.  Sixteen came.  There were seven of us that came from Los Angeles.

We were marching in the snow.  Cold.  Very cold.  There were brothers that were alongside of us and brothers that were driving the cars.  And I can go on with 20 years of stories.  A mosque, a study group, anywhere in this country, when we’ve come to them for their assistance and support, they have always been there.

“Brother Hector, what do you need?  How can we help?  What can we do to help the people?”  I just want to say thank you Min. Tony and Min. Wazir and the Nation of Islam.

This year marks the fourth Sacred Run of the Four Directions.  The designated locations are Long Beach, Marina Del Rey, Northridge and Pomona.  Indigenous peoples, the caretakers of the native lands, are in each of these locations.

Starting with a Sunrise Ceremony on April 18 at 6:00 A.M., participants will simultaneous run into different communities - old village sites and sacred sites - where there are misguided conflicts between the communities.

“All of the elders are gathering and it’s important for us to join and build our communities, our people, and reach out to our youth.  We need to do this globally as well as locally,” Bro. Hector said.

Posted by Charlene Muhammad at 9:02 PM

Beautiful story Sister. Thank you for the information and may allah bless you and keep you focused on the valuable work you do.