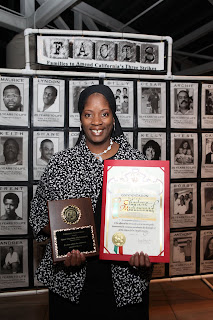 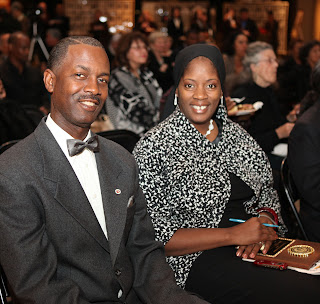 (Photos by Malcolm Ali - finaimage.com:  Sis Charlene with award plaque from F.A.C.T.S. and commendation from Supervisor Mark Ridley-Thomas, and on right with husband Ali Muhammad.)

The Final Call Newspaper has evolved from humble beginnings from its start in the basement of the home of the Honorable Minister Louis Farrakhan and his wife, Mother Khadijah, to its status as a highly respected national and international publication that is a leading voice of truth and independent news pertaining to Black and Indigenous people worldwide.

Recently, Charlene Muhammad, Final Call Western Region Correspondent of Los Angeles, California was recognized and honored by Families to Amend California’s Three Strikes and You’re Out (F.A.C.T.S.) law for her journalistic contributions and coverage of events and issues that impact the community.

Mrs. Muhammad, a multi-media journalist with an extensive background in print and broadcast mediums, said she was deeply moved and humbled to receive the award that was presented at F.A.C.T.S.’ 10th Annual Fundraising Benefit, “Get Up, Stand Up, Don’t Give Up the Fight,” at the California African American Museum in Exhibition Park on February 21st.  The evening highlighted the critical work of social justice and featured art, theatre, dining and musical entertainment.

Although she earned the recognition for her individual work, Mrs. Muhammad thanked Min. Farrakhan and the entire staff of the Final Call both past and present upon acceptance of a personally inscribed plaque.  It was her first journalistic award. “What makes this so significant and dear is that it came from an organization that is on the front lines of the struggle,” she said.  She enthusiastically thanked her husband, Ali, for his unwavering support and assistance of her duties and responsibilities to the Final Call.

When discussing this year’s award nominees, Geri Silva, F.A.C.T.S. executive director, told the Final Call, Mrs. Muhammad was a unanimous choice as the awards committee recognized her as a representative of the media who “tells our story and gives us a voice.”

F.A.C.T.S. was founded in 1994 as a statewide non-profit grassroots organization to advocate for men and women unjustly convicted by the Three Strikes Law.  The organization consists of community organizers, activists, and families working to amend the law, which automatically sentences people convicted of three “violent” or “serious” felonies to life in prison.  But since instituted in 1994, thousands of Californians have received life sentences for non-violent offenses, including stealing a pizza.

Ms. Silva noted her deep admiration and respect for Mrs. Muhammad’s journalistic integrity. “I’ve been places that I know are important.  There’s no other media there and I look up and there’s Sis. Charlene…..she’s just an advocate of the truth,” Ms. Silva said.

Posted by Charlene Muhammad at 8:05 AM

CONGRATULATION ON YOUR AWARD.

THREE STRIKES ARE IN GAME PLAYING

IS THERE A SIDE-LINE?