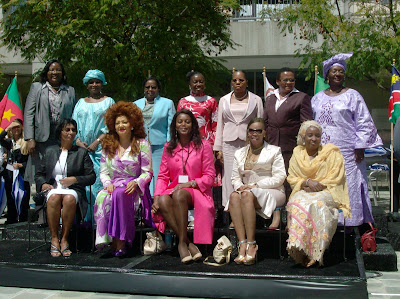 The very poised, collected, graceful African First Ladies shown here were a breath of fresh air and a striking contrast to the scorching hot temperatures that marked Day 1 of their Health Summit-Leadership for Health 2009.
Seated in the courtyard of the Skirball Cultural Center in Los Angeles April 20 are (top left to bottom right):
Ida Odinga, wife of Kenyan prime minister, First Ladies Laraba Tandja of NIger, Penehupifo Pohamba of Namibia, thandiwe Banda of Zambia, Maria da Luz Dai Guebuza of Mozambique, Mathato Sara Mosisili of Lesotho, Sia Nyama Koroma of Sierra Leone, Adelcia Barreto Pires of Cape Verde, Chantal Biya of Cameroon, Ana Paula Dos Santos of Angola, Queen Inkosikati LaMbikiza of Swaziland and Turai Umara Yar'Adua of Nigeria. (Photo by Charlene Muhammad)
At approximately 10:00 A.M. three customized buses carrying the First Ladies pulled into the entrance of the Skirball Cultural Center.  A fourth bus had broken down but passengers were OK and arrived safely.  One by one, the women leaders approached the carpet, greeted their hosts, Ted Alemayhu, founder and executive chairman of U.S. Doctors for Africa and Jean Stephane Biatcha, executive secretary of African Synergy against AIDS and suffering.
Afterward, they attended an opening press conference and posed for press photos.
California's First Lady Maria Shriver presented the keynote address for today's luncheon and pledged to continue a long lasting relationship with African First Ladies.
Their work today consisted of more than just photo opportunities, but they participated on workshop panels that addressed their roles highlighting HIV/AIDS, maternal, reproductive and child health, as well as girls' education.
More on the Summit in The Final Call soon. 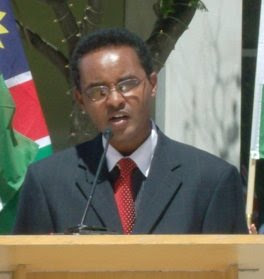 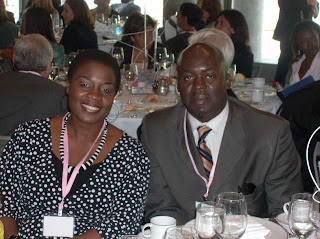 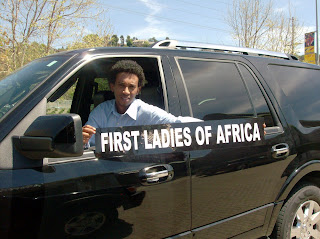 Posted by Charlene Muhammad at 6:25 PM

In the Name of Allah: Sister Charlene, how wonderfull it is to see the manisfistation of the picture that was on the early Muhammad Speaks News, with the hands across the continets of Africa and America, now also in the hands of the women. So many openings have come from the Minister's travels, Bro Akbar's deligence and the Laborer's of the Nation of Islam. I want to thank you for your open eye, and bringing this sumit to us. I can only say that you have been as a door,and behind you there are wonderfull (full of wonder) ways for us to grow. I pray the Sisters have a wonderfull visit,and a safe trip home.
Sincerly, Sis Kulsum Akbar