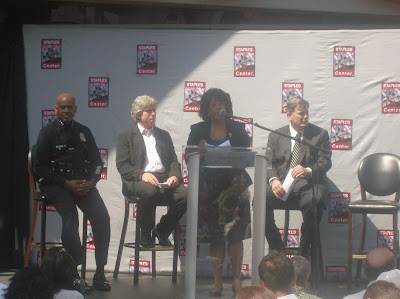 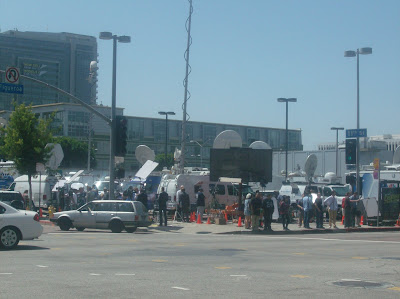 The 10:00 A.M. press conference on the King of Pop's memorial service was a media, and nearly fan, frenzy!
Speculation about when, where and how Michael Jackson would be memorialized were put aside this morning when a Jackson Family representative and City of Los Angeles officials  confirmed that his memorial will take place Tuesday, July 7 at two venues Downtown L.A.
Tim Leiweke (President of AEG (Jackson's concert promoter) and owner of the Staples Center), Jan Perry (Councilmember and Acting L.A. Mayor through Tuesday), Ken Sunshine (Jackson Family representative) and Earl Paysinger (LAPD Assistant Chief) gave no other details about the memorial's line up or expected performers or guests, but they did say without a doubt that there would be no viewing of Michael Jackson's body.
11,000 lucky fans will witness the event live in the Staples Center and 6,500 more will view it simulcast on three big screen theaters across the street in the new Nokia theater at LA Live, a new mega-entertainment center.
photos by Charlene Muhammad (l-r) LAPD Assistant Chief Earl Paysinger, Ken Sunshine (Jackson Family rep), Councilmember Jan Perry (podium) and Tim Leiweke, President AEG - Staples Center owner).
Media trucks and reporters flooded both parking lots at the intersection in front of the Staples Center.
The highly anticipated event will also be distributed via a world wide pool feed for free.
Within minutes of the announcement, eager fans caused www.staplescenter.com to crash.
Fans have until tomorrow at 6 p.m to register for two each of the 7,050 tickets on hand.  Between 11 A.M. and 8 P.M. Sunday, fans selected from a random drawing will be notified how to pick up their mandatory tickets and wristbands.
Without them, Chief Paysinger said, people will not be allowed in the perimeter.
Easily, he told the Final Call, they are expecting 500,000 people or more to converge on the area.
Ken Sunshine stressed respect for the Jackson family during what is still a very difficult time.  Chief Paysinger and Councilmember Perry stressed public safety, and Mr. Leiweke stressed that absolutely no tickets would be sold, per the family's request.
LISTEN, if you're in L.A. on other business, do yourself a favor and avoid these streets, which will be hard boundary closures on Tuesday:
Flower east,
Olympic north,
Pico south
Blaine street west.
More in the upcoming Final Call soon, God willing!
Posted by Charlene Muhammad at 11:54 AM