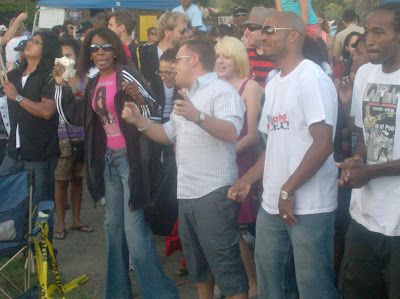 While millions of Michael Jackson fans scrambled to win lottery tickets to his memorial service on July 7, hundreds more had a down home celebration of life at the front entrance to his Neverland Ranch in Santa Barbara County.
From the time we hit Figueroa Mountain Road leading to the property, we could hear his music blasting from the back of parked cars and sonic boom boxes.
This crew didn't care about the restricted dance floor.  They still rocked a limited version of the electric slide when P.Y.T. (Pretty Young Thing) came on! 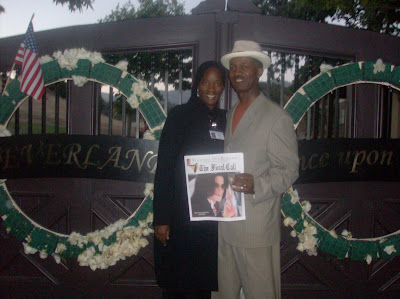 I can't lie, I wanted to bust a move so bad, but you know.  I didn't.   (But Ali and I did take a picture.....)
People had come from everywhere:  Norway, the Phillipines, London, Guatemala.  Although they were sad about his passing, they said they found joy in hearing his songs and just being there with each other. 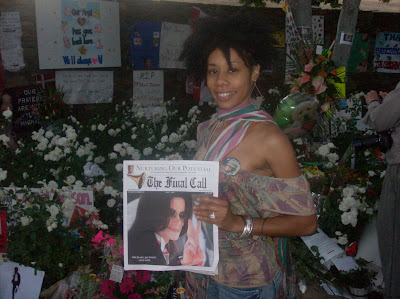 We met a lot of interesting fans like Kena Sage from Atlanta.  She just happened to be in L.A. on business when Michael died. 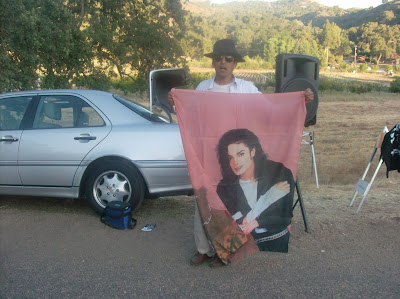 Wiedjai Sewgobind from London says he's been crying all week and yesterday, when he arrived at Neverland, really was the first time he felt better.
More in the next issue of the Final Call, God willing!
Posted by Charlene Muhammad at 7:34 AM