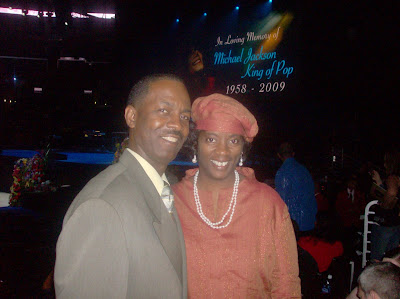 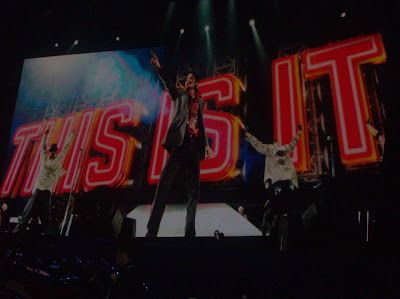 (Look for more on the Michael Jackson Public Memorial in next week's issue of the Final Call!)

Celebration and sorrow filled the air inside the Staples Center during the Michael Jackson Public Memorial Service.
In a few words, the King of Pop's home-going was classy, somber, star-studded, exciting, all at the same time.  Out of millions of people, journalists in the world, Allah blessed me to be inside the center with Ali, my husband and constant Final Call companion.
The Final Call was not just on the inside, but we were three rows from the floor in the first section from the stage, and slightly elevated, so we could see everyone and everything coming in and going out:  the Jackson Family, Chris Brown, Dick Gregory, Usher, Jennifer Hudson, Lionel Richie, the Honorable Minister Louis Farrakhan and his children, Mustapha, Joshua and Maria, Spike and Tonya Lee, Rev. Al Sharpton, Berry Gordy, Sean Combs (P-Diddy), Don King, Mike Tyson, Smokey Robinson, Rev. Michael Eric Dyson, Rep. Sheila Jackson-Lee, Kyla Pratt, Terry Crews, and on and on.
As you may have witnessed, there were countless, memorable moments during the ceremony but Paris, Michael's 11-year-0ld-daughter, pulled all the reservation and 'keep-it-togetherness' out of the audience when she spoke about her daddy being the best anyone could imagine.
In the section just above us fans began sobbing and weeping loudly, just as they did when Stevie Wonder sang.
One woman kept reaching out her arm to the child and covering her mouth with her t-shirt to try to control herself, but she couldn't help it.  She wasn't the only one.  We could hear the sobs throughout the Staples Center, just as clearly as we heard the periodic outbursts of "We love you, Michael," and "Thanks for making me a better person, Michael!"
For the record, one news pundit reported that Smokey Robinson false started the ceremony, however, he didn't.  While I was greeting Min. Farrakhan and his family and delegation, the announcer began ushering everyone to their seats and the memorial began.  I'd gotten a text from our son, Askia, that the Jacksons' motorcade was enroute from their private ceremony at Forest Lawn Cemetery.
After Mr. Robinson read statements from Diana Ross and Nelson Mandela, the Jacksons arrived and out of respect, things paused.  The center erupted in applause and recognition of them and once they were all seated, every one of them and their guests, the service resumed.
The break wasn't a mistake or error.  This was right to do.  It's how we do things.
We noted no  incidents in or outside that could have spoiled the occasion.  As we were driving inside the perimeter, police officers were scolding a few vendors who were walking through traffic, but nothing else.  No one seemed to mind the long lines and wait to enter the Staples Center.
When we got into the "hot zone," we saw about 300 people in line, leading from the beginning of the LAPD check point, extending under an overpass and nearly to the freeway, but we turned into our parking structure before I could see where the line actually ended.
My husband and I realized that by 9 p.m. we were still reflecting on the day so much that we still had on our wristbands.  "The Staples Center was transformed by the spirit of the people, which reflected the spirit of Michael Jackson.  The magnitude, for me, could only compare to the Million Man March, meaning like the millions of men who wept at the March, I couldn't help but weep during parts of the tribute - when his daughter spoke and when Rev. Sharpton fired up the audience," Ali later shared with me.

I think what impacted me most about the service was the realization that the Jacksons are people too.  We get caught up in their star power, mystique, and fortune, but at the end of the day, they stood on that stage, together, Black, Bold, Beautiful, and unified, to give their loved one his due.
Thank you Jackson Family for letting us share in this moment in such a big way.
RIP Michael Jackson.
Posted by Charlene Muhammad at 10:06 PM

Beautiful post Sis. Yes it was a beautiful ceremony. I am blessed to have seen MJ perform twice in my young life. He was not only a great entertainer but a profound thinker, all you have to do is listen to the lyrics of the songs he wrote. I love the fact that my mom & I both have fond memories of seeing the Jacksons in concert. May he RIP and I pray that his children find a peace that their father never knew.