NO JUSTICE FOR SUSIE PENA 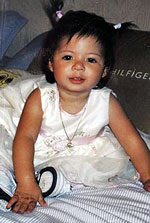 Remember 19-month-old Susie Pena? How could we forget the plump-cheeked baby Latina that was shot and killed in July 2005 when LAPD SWAT officers stormed an auto sales shop in Watts. Her father, Raul Pena had taken her hostage in a stand-off with police and barricaded them both in the shop. No doubt they killed Mr. Pena, but sadly, Baby Susie was also shot once through the head.

Judge Rolf Treu dismissed the wrongful death lawsuit filed by Baby Susie's mother, Lorena Lopez, saying there was not enough evidence presented during the trial for a jury to find that the officers acted unreasonably.

According to reports, the judge ended the trial on the day the jury was supposed to hear final arguments.
We'll never know what the jury would have decided. But what if ...?
Posted by Charlene Muhammad at 8:36 PM