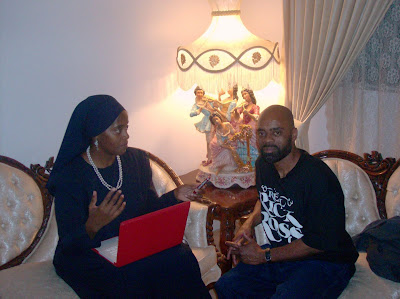 Several months ago I got a phone call - three in fact - informing that former 'crack cocaine kingpin' Freeway Ricky Ross was being released from prison. He was utilized as a pawn in the CIA's scheme to distribute crack cocaine throughout urban cities all across America and was sentenced to life in prison for his role.

I received a call inviting me to Ross' homecoming celebration just as my family and I were arriving at our mosque for an address by the Honorable Minister Louis Farrakhan tonight. "We apologize. We meant to call you sooner, but we hope the Final Call can make it," his brother, David said. Hope! Please? This was the call.
After soaking in Min. Farrakhan's prophetic message we rushed to Ross' family's home. I thought we'd be driving far but who knew? It happens to be in the same neighborhood as mine / close walking distance. This gave us more time to talk. Today was a good day.

Ross shared a lot - lessons learned, whether he has any regrets, and why he feels he's on a God-given mission.


I'd never met Ricky Ross before - except through the countless news stories, articles and documentaries that have showcased his life. I tried to be unassuming. I didn't know what to expect.


We arrived and were greeted by a very humble, kind, grounded person, fully at peace with himself and his mission, which he told the Final Call is to save as many young lives as he can.


Check in with the Final Call Newspaper soon to find out how Rick Ross is doing this. (http://www.finalcall.com/).

Posted by Charlene Muhammad at 11:06 PM

This is the best email in a browser that I’ve read in a while.

Looks awesome! I do welcome the tabs placed on the top!

Nice one, might come in handy in the near future

Hey! Just thought I’d chime in. I really enjoyed your post. Keep up the awesome effort.

great site! I am supporting it!! Will definitely come back again – having you rss feeds also,

This is a good,common sense article.Very helpful to one who is just finding the resouces about this part.It will certainly help educate me.