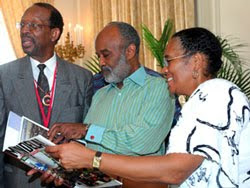 The Many Hands Effort

The Many Hands Effort requests monetary donations instead of supplies to in part help boost the efforts of trusted relief organizations, and to avoid having the donations eaten up by the high shipping costs. Saturday's event is sponsored by a coalition of pan-African activists and organizations.

If you can't make it Saturday, you may also:

Earlier I corresponded by email with a dear sister from Haiti, an actress, who had just arrived in New York last night from her native land, she told me.  I met her and a delegation that had accompanied the Mayor of Port Au Prince during a Final Call assignment last year. Sister told me that she'd made contact with husband, who was still in Haiti, and that he was alright, but she was still awaiting word about her family.

Just about four months ago Final Call Editor Richard Muhammad made a pilgrimage to the Citadel in Haiti.  He was part of a delegation, spearheaded by Dr. Ron Daniels and The Haiti Support Project (HSP), which went there to promote cultural and historical tourism to help develop the nation.  They met with President Réne Préval and his wife in the Presidential Palace, which has been destroyed by the magnitude 7.0 earthquake that struck Tuesday.

The quake has rendered thousands dead, 500,000, some Haiti officials estimate, and at least 1/3 of Haiti's population of 9 million potentially in need of emergency services, according to the International Red Cross.

The people of Haiti will need as much support that the HSP, Many Hands Effort, Red Cross, Wyclef Jean's Yele organization, and people worldwide, can give them.

Posted by Charlene Muhammad at 10:31 AM