2009 was a blessing for me - particularly the trials and the hard learned lessons.  All of it was a catalyst for the road and the work ahead.  It's almost 3 a.m. and I'm still very much in reflection and projection, but I wanted to share some of the commentaries on 2009 via the Final Call's year in review.  God Bless!  Let's go get it!
Peace...Sis Charlene 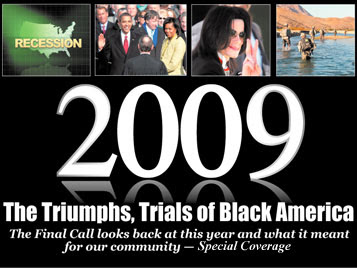 (FinalCall.com) - Barack Obama taking charge as the president of the United States was seen as the most significant development for Black America in 2009, according to analysts interviewed byThe Final Call, but despite that historical change—serious challenges remain.

Blacks still live in greater poverty (24.7 percent) than non-Hispanic Whites (8.6 percent), Asians (11.8 percent), or Hispanics (23.2 percent), despite recent increases in poverty levels. Black men are incarcerated in U.S. prisons or jails at a rate more than six times higher than White males. In addition, Black unemployment increased from 8.9 percent to 15.6 percent since the recession struck in 2007, while overall, the national unemployment rate rose from 4.9 to 10.0 percent.

“Any assessment of last year must concede that there was both great joy and hope as well as deep disappointment as things settled in, returned to the rule of big business as usual, and people realized that symbolism is not substance and that there is no substitute for self-conscious, committed and continuous struggle,” said Dr. Maulana Karenga, creator of Kwanzaa and professor in the Department of Africana Studies at California State University Long Beach.

(Full story at http://www.finalcall.com/artman/publish/National_News_2/article_6687.shtml)
One of my most memorable 2009 photos, courtesy of Kenneth Muhammad 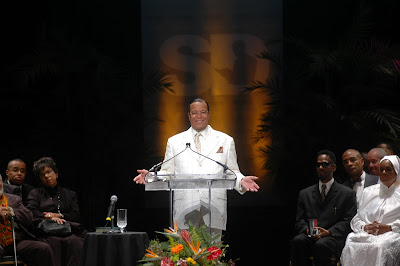