The old reaching for his waistband trick

The LA Times reports that LAPD Gang Enforcement officers Allan Corrales and George Diego fatally shot a Black man, 27-year-old Steven Eugene Washington, shortly after midnight on Saturday, March 20.  According to his family, the report says, he had learning disabilities and was generally afraid of strangers.  Word on the street is he was autistic.  The report went on that officers feared for their lives because he didn't respond to their commands and -  wait for it - he  appeared to be reaching for his waistband.

When I read this story this morning, I couldn't help but think of something that my fitness coach, Erich Nall (aka Coach E) often says when any of us miss his sessions, for what we think are good reasons or whatever.  He is hilarious, but a serious and qualified coach and nutritionist whose point hits home everytime.

It is 2010.  Can't law enforcement come up with anything else besides the old he was reaching for his waistband trick?  ANYTHING?  Somebody give them a hand.  What other excuse can they use? 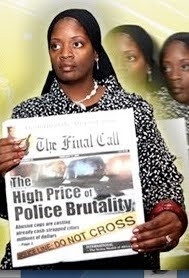 The high cost of police brutality

LOS ANGELES (FinalCall.com) - Abusive cops are costing already cash-strapped cities across the U.S. millions of dollars in settlements but civil rights activists and attorneys warn that the payouts will continue unless the criminal justice system begins to prosecute its out-of-control officers.   http://www.finalcall.com/artman/publish/article_5669.shtml

Posted by Charlene Muhammad at 7:43 AM