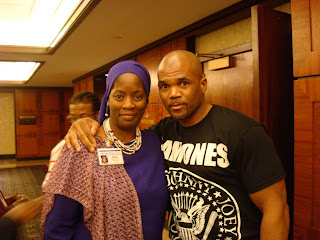 Picture this:  It’s day 2 of NAN, New York and I just finished covering the Keepers of the Dream gala’s red carpet.  So I go to a tucked away lounge area at the Sheraton and while I’m processing my pics, interviews, business cards, you know, stuff, I hear a lot of laughter.  When I checked it out, there were the Roots, DMC of the legendary Run DMC, and others, networking.  Needless to say, because I enjoy the music of both very much, I got over there to get an update on DMC and his analysis about where the industry is and is headed these days. 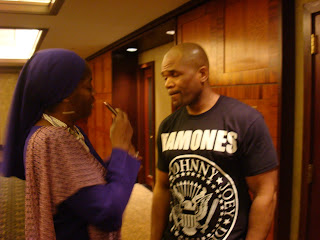 Sis. Charlene Muhammad (SCM):  First, Bro. DMC, how are you doing?  Look, seeing you brings back memories of how my roommate and I at Southern University used to blast your raps.

Darryl McDaniels (DMC):  Yeah, “The King of Rock,” yeah.  I’m doing good.  I’m doing.  I’m just trying to keep that energy, that mind state of high, because a lot of people think old school was a time period, but it wasn’t a time period, it was a consciousness.  It was a way of presenting and representing yourself.  And it wasn’t just about this person or that one, it was about all of us collectively.  Everything was Hip Hop.  School was cool.  Rapping was cool.  Pursuing your dreams was cool.  And like (Afrika) Bambaataa said, it was about us taking control of our own destinies because we have everything that we need to change the world.  And then Hip Hop got so big to a point where, you know, it was inevitable that it became this big show business thing, but the people that’s in the business of Hip Hop don’t care about the culture or the lifestyle of the people that embrace it, that live it everyday so it’s up to us to not be so angry at what has happened to Hip Hop but it’s up to us to go against all of those, you know, these record labels got million dollar budgets but we have one thing they will never have. That’s presence and presentation.

That presence and presentation changed the world, whether it was the first rock ‘n rollers, you know what I’m saying.  Chuck Berry, all of us, Fats Domino, all of us, so we just have to continue to be persistent in utilizing what was given to us and we can continue to change the world, so that’s all I’m trying to do.

SCM:  Bro. DMC, do you think that people come down too hard on Hip Hop?  And what’s your message on your presence here at the National Action Network’s convention.  People would have you think that those two things, the Civil Rights Movement and your genre, Hip Hop, are separated.  And is there a way for people to get the message out that they want it to change without just alienating the youth?

DMC:  Yeah, well, put it like this, I don’t think we come down hard enough on Hip Hop.  You know a lot of us are satisfied and we get comfortable and when you get comfortable  that becomes a problem.  There’s things that have happened over the course of us being in this world or even in this country that was positive but unless we take it upon ourselves, you know, it’s like I tell a lot of people in the hood.  We’re happy that Obama got elected but he ain’t no babysitter.  So they looked at me and said, “What do you mean by that?”

And I said go back and listen to Planet Rock.  Go back and listen to Grand Master Flash and the Furious Five.  Go back and listen to the Treacherous Three.  All of these rappers that were making records before it was on a record, it was all about civil rights.  You know, they were looking at us, putting us in a class of we’re just good for jail.  We don’t know nothing.  We could only be lowlifes.  And we started coming out with this Hip Hop thing because it gave us a chance to express ourselves.

Hip Hop is going to have its materialistic elements but the young people go, “DMC, you’re 40 years old now, and you’re saying everything that you’re saying because you’re  wiser, maturer, and more experienced.  And I’ll go, “Yes, young brother or sister.  That’s true.”  But they don’t realize all the great, not the great records that sold and charted, but I’m talking about the records that changed people's lives were created by individuals 12 to no older than 22 years old.  It was me and you with those visions and we started putting that on a record, so the world was able to look at us and say - politicians, lawmakers, preachers, teachers, and the powers that be - they wasn’t just saying, “Whoooa, Run DMC and Public Enemy and Will Smith and them are selling a lot of records.  They were going, do you hear and see what these younnnng people are doing?

I’m 45-years-old saying this now, and they’ll say, oh you’re just saying this now, and that’s true.  But I’ve been saying it since I was 12.  Go check those records.  And by the ideas, images, and concepts we was putting on those records, it was change.  And then it got a point where so-called gangsta rap came, which was inevitable.  I talked to Ice T.  He said you want to make a lotta lotta money, sex and violence sells when it comes to this entertainment business.

But at the same time, P.E. sold, Will Smith sold. Run DMC sold.  De La Soul sold.  X-Klan sold.  The problem is, the people that control the business don’t provide those other ideas, concepts, and images.  You know, when you look at T.V., you see half naked, Black women on all these shows.  You don’t see a fully clothed Black women with a briefcase, doing something positive!  So these girls are looking at these women on T.V. saying, and you know it’s not that art causes the problems but they’re looking at themselves on T.V. saying that’s all I could be, a girl that’s half naked chasing rappers and athletes.

No!  What about the women doing their business.  What about the reporters, the journalists, the producers, people like yourselves?  Hip Hop said, oh, nobody’s going to do it for ourselves. So let’s put it on a record and in videos and do it ourselves.  So the Civil Rights struggle is still going on until we make sure we have our own mediums and platforms to control, you know what I’m saying?  Not to hide it, but to control it.

Posted by Charlene Muhammad at 12:05 AM