Mrs. Billie Boyd tells how she lost her husband, her home, and her dream in under a year 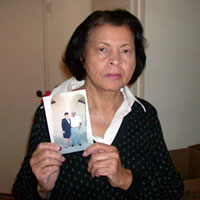 Billie Boyd shows a picture of her late husband, whose death led to a series of events and ended with the loss of her home.  Photo: Charlene Muhammad

RIALTO, Calif. (FinalCall.com)- Billie Boyd did not expect to lose her partner and their home in less than a year, but when her husband Robert died, his passing set off a financial crisis that forced her out of her home within 10 months.

She was 66 and he was 86 at the time he passed away. Their beautifully decorated, two-story home of almost 25 years was nestled in a cul-de-sac in an average, middle-class neighborhood.

As their bills mounted up and their house grew in need of routine repairs, they sought refuge in a special reverse mortgage loan package designed for seniors, which let them turn equity in their homes into cash. But the bulk of the lump sum of $65,000 they received unfortunately went to home repairs and credit cards, Mrs. Boyd said.

The reverse mortgage loan transfered their debt from the mortgage to their lender but it didn't touch their Social Security or Medi-Cal. They were at ease, until the housing market crash occurred. “Because it's not a fixed rate, it's graduated and we owed more on this place than its valued at. It might be $300,000 now whereas it's valued at only $100,000,” Mrs. Boyd told the Final Call on March 24, the day she moved out.

Now, the 66-year-old, who earns $8 an hour for two hours a day working part-time, has gone from paying no mortgage on a three bedroom home with a fireplace and backyard to paying a $898 a month for a one bedroom apartment in a senior village.

In order for Wells Fargo to collect on the loan, the house had to be sold. Mrs. Boyd said she wasn't very clear on the process at first but understands what has taken place. She just believes her lender was insensitive because about two months after her husband died, the bank contacted her with regrets over her loss, and to inform her that she had to move, she recalled. “The timing was horrible and I really didn't have any time to grieve,” she said.

“I tried to reapply and get my name on it to stay here but everything tanked out. They just have those rules, government rules, and the bank gladly threw me out. That's the way it is and all this talk about the economy, all of it sounded great, but they never mentioned the downside of this,” she said.

“I see people all the time interviewing on the news, but no one is talking about what seniors are going through. They never interview seniors about reverse mortgage but that's just another story in this tailor-made bank and Wall Street greed,” Mrs. Boyd said.

Despite her tragedy, she also believes that the American public is partly to blame for the housing crisis.

Lloyd London, founder of TYL Homeownership Preservation Services, told The Final Call the problem is that many people didn't know what they were getting into financially and didn't know that someone impartial was there to explain the process to them without pressure to buy, sell, or do anything.

Much of the problem starts in the loan origination process, when people are convinced to quit claim or transfer titles to their properties over to their spouse or another individual. The attraction to reverse mortgages is that no income is necessary to qualify and the older one is, the more qualified they are.

But the catch is reverse mortgages are based solely on the value of the property and Boyds didn't foresee the downturn in the market. “Wells Fargo might not have wanted the house but it was federally insured, and had to follow the rules of the federal government and if not face violation issues,” Mr. London said.

“The problem is people were supposed to be going to counseling by certified home equity or reverse mortgage counselors, but in a lot of instances, they took the advice of the lender instead of the counselor. But lenders half-heartedly directed you to housing counselors because most are considered a nuisance to servicers and lenders because they interfere, stop, or delay the process,” he added.

Mr. London said he has not seen or heard of too many seniors losing their homes under reverse mortgages, but he expects more to come, as it becomes harder to identify housing counselors to help them.

“Because housing counseling agencies are non-profits and because of the lack of funding a lot of them don't have a budget to support any outreach advertising. A lot of the work is done through the grassroots and homeowners in trouble don't know that people exist in order to aid them,” Mr. Lloyd said.

Wells Fargo’s response to my request for interview came in after my story had already published but here it is:

The U.S. Department of Housing and Urban Development (HUD) requires a reverse mortgage to be repaid within six months of a borrower’s death.  If the estate needs more time to sell the property or pay the debt, the lender can request up to two 90-day extensions, giving a total of one year to repay the reverse mortgage.  Wells Fargo is helping the family through the process according to federal guidelines for the reverse mortgage program.

Posted by Charlene Muhammad at 12:46 PM

Good Job, YourBlog will be the top 10in the world!!