One-On-One with SIS. KAREN FARRAKHAN and WOMEN OF DESTINY 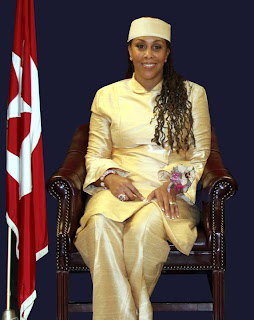 Karen Farrakhan wears many hats.  She is most widely recognized as the wife of Mustapha Farrakhan, Supreme Captain of the Nation of Islam, mother to their 5 children (4 daughters and 1 son), and daughter-in-law of Nation of Islam and world leader, the Honorable Minister Louis Farrakhan and his wife, Mother Khadijah Farrakhan. To the responsibilities she already gracefully carries, she cheerfully added women’s advocate and youth empowerment to her hat box when she launched “Women of Destiny, Incorporated,” a program to help recognize the issues that confront our youth and tools to assist them in preventing and overcoming.

When I heard about what she was doing, I just had to call her!  I had the pleasure of speaking to Sis. Karen about her non-profit effort, and how it became her goal and passion.

[LOOK FOR FINAL CALL CONTRIBUTING WRITER SIS STARLA MUHAMMAD'S COVERAGE OF THE EVENT IN THIS WEEK'S ISSUE OF THE FINAL CALL:  BY THE BROTHERS ON THE STREET CORNERS, YOUR COMMUNITY NEWS STAND, OR IF YOU'VE A SUBSCRIPTION, YOU CERTAINLY WON'T MISS IT!]

Charlene Muhammad (CM):  How did Women of Destiny come about?

Karen Farrakhan (KF):  I started the program in 2008 and my goal and passion has always been to try to empower young girls and women.  Being a mother of four daughters and one son, and people throughout my life have always told me how they’ve admired me and my children.  I believe you have to share what you have with people.  When people see our family unit together, they ask how can they achieve what we have, that whole nucleus? That was a defining moment for me to say I’ve got to do something because there are too many of us that are suffering.

CM:  Did you get those comments about the unity and solidity of your family coming from within and without the Nation of Islam?

KF: Both, wherever we go.  In the Caucasian community, some people would say, “Man, you’re nothing like we thought.”  Or, “Wow, you parents are so supportive of your children and in general what I would hear often is you’d be surprised but your children act as if you’re sitting right there even when you’re not around.  When my children were growing up I monitored what they watched on TV and I never let them watch anything with sexual connotations in it.  I know that seems kind of hard to do, but on days when I was tired I’d put on the Discovery Channel or something about nature, but over all we really were mindful.  So if they were with someone who had on a show or went to the movies, they’d say, “Karen, your children covered their faces during those parts,” which really made me very proud and comforted that they were getting it.

CM:  What was your motivation for Women of Destiny?  When I heard there was a HIV component, I perked up, because my oldest sister had HIV and passed away after she grew tired of taking her meds.  She was fatigued, but she left twin girls, uninfected, who are in their teen years today.

KF:  Sorry for your loss. My motivation was one of my speakers, Dawn Breedon.  I grew up with her in New Jersey and our families have a lengthy relationship.  She wrote a book, Remember to Breathe, and I wanted her to share her story with our people, our girls, and let them know that there are so many things to consider while choosing a mate and that there is life after contracting this disease.  To make young women aware that there are things that you can do to prevent spreading it to your offspring.  If you catch it in time and do the proper things your doctor tells you to do, you can virtually have a baby that’s not infected with AIDS.

CM:  What type of response have you received?

KF:   Well, let me tell you this.  I had a major surgery in 2005 and went on a trip about a month after the surgery.  I was talking to Shaquille O’Neal’s wife, (Shaunie), and I was telling her, “Wow, you have the resources to really empower our community.  I don’t mean with just your money but to actually set up some places where you can really have an impact and help our little sisters and that your name can live on.”  I shared with her my passion about empowering young girls and really helping them understand their value as young women and to make them realize that high school is like a microcosm of your life but there’s life after high school.  To make them know not to settle and with knowledge and wisdom make sound decisions that they won't have regrets when they get older.  So to answer your question many mother's have been eagerly encouraging me to just go on and step out and do it.  In 2008 I developed the program and Dawn and I discussed her speaking out here but since I’m not currently funded, it was difficult to see how I could bring her here to speak.  Thanks to Allah we made it happen.  Allah opened up a door to provide for me to do everything that I’m doing.  It was just an affirmation that it’s the right time.

CM:  What is the age group for your primary target audience?  Your message is specifically for whom?

KF:  Women, in general, however, a targeted age group is between the ages of 10-18 basically middle school and high school ages.  I considered targeting younger than 10 but I realized that some parents may feel I'm embarking on or exposing their children to situations the they are not ready to discuss with their children.  The reality is by middle school many students are confronted with a lot of these issues so we have to catch it while they’re young.

CM: Research shows that the level of sexual of activity among our young girls and infection rates are very high.  How do you actually cut through that dialogue first, before you can or just so you can even get to the HIV discussion?

KF:  My children are my case study basically and the bottom line is when I was rearing my children everyday was a class.  Everyday we always talked in the proverbial sex, drugs, and rock-n-roll.  And in anything that you talked about in this society, that people say are hip or what's happening, you can relate it all to the same thing because it’s all intertwined and connected.  I’ve always tried to teach them that you always have to look out and be careful of where you are, and who you associate with, and then I tried to give them examples of situations so whenever they were confronted with an issue, I would try to help them know how to handle it.   And then of course, if they didn’t take that route, they felt the brunt of the consequences of it because I was a strong disciplinarian.  But after a while they started to see, wow, from other friendships they saw them take that road that was opposite of what I was teaching them and they didn’t want that result.  So I’m very grateful to Allah that I have children who have been wise enough to listen to good counsel and guidance thus far.

CM:  Were they an ultimate case study as well because they are Farrakhans, by virtue of who they are?  So whatever a “normal” or “ordinary” parent and teen or child would go through, then for your children that must have been heightened because all eyes were on them and they’re expected to be a certain way and walk right.  But if they could come through certainly parents like me or others could look at their example?

KF:  That was one of the factors, who you are, and we already have a stigma attached to us.  In our community we end up hearing, they think they’re better than, and that’s not the case at all.  And in the Caucasian community, from the mis-representation from their media portrayal of us as racist.  So I encourage them to be who they are and be respectful to others, self-respecting and really treat people like they like to be treated, despite how ignorant they can be.  Man, you’ve got a bright future ahead of you so don’t waste it.  My father-in-law’s mother, their great grandmother, had a poem called “Don’t Be the Women that Men Forget.”  It’s a cute little poem.  I don’t have it readily available or know it verbatim, but basically it tells you that men will go through all these different women but the women they can’t have their way with are always the ones they will remember to come back to marry.  So don’t be the women that men forget.

CM:  What are the highlights of your Women of Destiny programs?

KF:   Our 1st program dealt with HIV/AIDS prevention and awareness, along with breast cancer prevention and awareness.  We had a few inspirational songs.  A group called HYPE, out of Chicago State University, performed a poetry/sign recital.  We had guest speaker Dr. Stephanie Brown of PIHET to enlighten us about breast cancer. My friend and guest speaker, Miss Dawn Breedon, a motivational speaker and author of "Remember to Breathe," and last but not least, our own Sister Minister Ava Muhammad, ended on a spiritual note.

However, we plan to educate them on several issues our youth our confronted with like domestic violence, overcoming peer pressure, the seriousness of sexting, overcoming bullying, drug and gang prevention, the importance of physical fitness, proper etiquette and hygiene, and God willing, provide scholarships, basically give them a guideline of how to recognize these types of situations and give them an orientation of how to make wise choices.

CM:  How can people find out more, participate, volunteer, or donate to the cause?

CM:  Much success to you and to Women of Destiny!  Thank you.

Posted by Charlene Muhammad at 12:09 PM

May Allah Bless you Sister Karen and grant you much success with your programs. I am looking forward to getting involved with your work and learning as much as possible from what you have to offer. Please don't stop, we need this for our girls and ourselves.