Things You Can Do Immediately After Minister Farrakhan’s Speech and the Release of the Book The Secret Relationship Between Blacks and Jews, Volume 2. 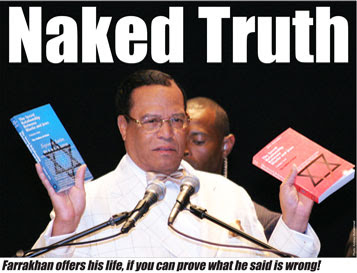 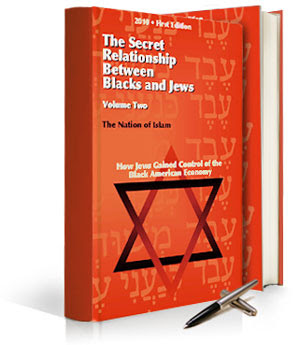 I saw this on Facebook / thanks Bro Ashahed/Bro Jesse:
Things You Can Do Immediately After Minister Farrakhan’s Speech and the Release of the Book The Secret Relationship Between Blacks and Jews, Volume 2.

-After you get the book(s) READ the book(s). DO NOT go out and speak and attempt to discuss the topic before you have gained a sufficient level of knowledge regarding the subjects.

-Minister Farrakhan’s speech delivered June 26 titled “Who Are The Real Children of Israel?” is available via webcast IN ITS ENTRIETY for FREE at http://www.noi.org/webcast/atl2010/

-Promote the viewing of this message through various social networking websites such as YouTube, FaceBook, Twitter and MySpace. Forward the link to listservs that you manage, as well as your other email lists that you may belong to. Post this link in chatrooms where this topic is being discussed. DO NOT SPAM!

-Call in to local and national talk radio stations and request a discussion on the topic of “How Jews Gained Control of the Black American Economy” as well as “How To Improve Black-Jewish Relations.”

-Begin a study group or dialogue session dealing with the topic of Minister Farrakhan’s June 26 speech and/or the books. This can be done at churches, recreation centers, barbershops, beauty salons, college student unions and street ciphers.

-Research and encourage others to consult the historical record of the archives of your major local newspapers, perhaps even your major colleges and university libraries regarding the history of slavery and Jim Crow.

-If you have membership in a fraternity or sorority, or any professional civic organization such as the NAACP, the Urban League and others, set up a panel discussion regarding the books and possibly the speech.

-Go to Amazon.com, Barnes and Noble (Bn.com) and write or post reviews of the books on those websites.

-After reading the book(s) submit Op-Ed pieces and write Letters to the Editor to your local newspapers and other popular news sites.

-Google online search terms like “Anti-Semitism” or “Farrakhan” or “Trans-Atlantic Slave Trade” and post content from the book and speech, offering factual corrections if necessary. Specifically be mindful of Wikipedia entries that are inaccurate and/or contain outright lies, which is often the case.

----------------
Here are some excerpts from “The Secret Relationship Between Blacks and Jews” Volume 1 that you can forward to others that may generate interest in the content of the book:

From the section titled “Jews and Abolitionism”

“Those few Jews who stood against the institution of slavery were scorned and rebuked--most harshly by their own brethren in the synagogue. Even the anti-slavery Jews opposed the spread of slavery not out of sympathy for the condition of Blacks, but because it as a threat to their jobs.” (P.147)

“In the midst of this assault and the hardening of Jim Crow, the Black man tried to maintain a foothold on the American Dream, but found the Jewish merchant class unwilling to offer a hand.” (P.173)

“Jews engaged in the widespread practice of the sexual exploitation of dependent female slaves. Such was the practice of Jews since the Middle ages--a practice that required religious legislation to abate. Slave women were employed primarily for domestic and agricultural service in the households of the Jewish upper classes.” (P.196)

The Marranos were those who compulsorily converted Jews and their descendants who outwardly became Christians but secretly continued to meet in the synagogue, celebrated feast days and observed the Jewish Sabbath.” (P.11)
----------------
From the chapter titled “Jews and Slavery in Colonial South America and the Caribbean”

“Jewish slave traders procured Black Africans by the tens of thousands and funneled them to the plantations of South America and throughout the Caribbean…Blacks poured in and in some locales eventually outnumbered white by as much as 5 to 1 in the cities and 30 to 1 in the rural plantation areas…The Jewish sugar planters prospered living on large plantations and making extensive use of local Indian labor and imported Black slaves.”
----------------

Here are a two excerpts from “The Secret Relationship Between Blacks and Jews” Volume 2 that you can forward to others that may generate interest in the content of the book:

“This Jewish banking network was certainly not limited to the South, but existed in every area of the continent where Jews settled and opened businesses. This study focuses on the Jewish bankers of the south because of their direct impact on the fortunes of the Southern Black population.” (p.165)

“The fact is that many of the largest and most successful Jewish businesses were founded and developed into major operations in the South, under the most racially hostile conditions that have ever existed.”(p.173)

----------
Feel free to email this information to anyone you feel can use it. Once you have the truth, you have an obligation to share it with others. It is actually your divine duty.