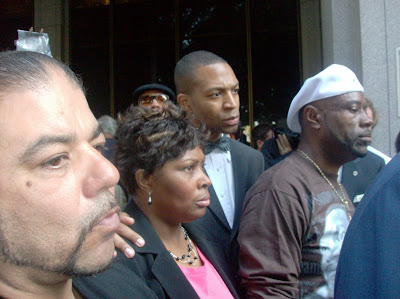 "My son was murdered!  He was murdered..." declared Wanda Johnson after Oscar Grant, III.'s killer was found guilty of involuntary manslaughter for shooting  him in the back at close range on New Year's day 2009.
The day the verdict was announced on July 8, emotions were high, hopes were high, but realities set in.  There is no justice for the Black man and woman in the United States.
Look for coverage in the next edition of the Final Call Newspaper.
www.finalcall.com
pictured above - left to right:  Jack Bryson, Wanda Johnson, Student Minister Keith Muhammad of Oakland, and Cephus Johnson (pic by Charlene Muhammad)
Posted by Charlene Muhammad at 2:27 PM