The Final Call at the National Association of Black Journalists Convention 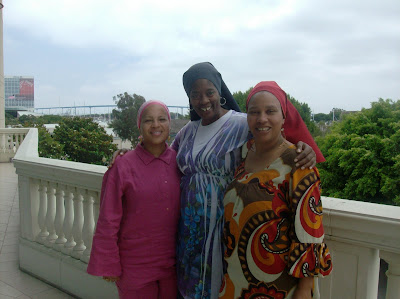 San Diego is the spot for this week as Final Call staff writer Sis Nisa Islam and I will hit beautiful San Diego to attend the National Association of Black Journalists (NABJ) Convention and Career Fair.
I was invited by Professor Francis Ward of Syracuse University to be on the panel regarding how readers between 9 and 18 get their news through the various technologies - Twitter, FaceBook, blogging, on their cell phones, and how this is impacting Black media ownership.
I've never met Prof. Ward before and am excited about the meeting, however, I've known Bro. Danny Bakewell, Sr. for as long as I've been writing for the Final Call, and that's about 14 years this year.  I've covered his efforts when he was at the helm of the Brotherhood Crusade and I've contributed to the LA Sentinel often.  A highlight was when He, John Mack (current president of the Los Angeles Police Department Commission and then president of the Los Angeles Urban League) and I participated on a Black History Month (now called African American Heritage Month in LA) panel at KTLA Channel 5 with the late veteran broadcaster Hal Fishman.
It's always a humbling and exciting learning experience when I can attend any type of conference or seminar on behalf of the Final Call, but what makes this one special is it's put on by our people, my colleagues, and a lot is going on in the industry that we'll all hash out in terms of the future of the Black press, and other things.  I'm going to be focused on how to perform better and looking for whatever products, ideas, etc., that can help me do that.
Other very important highlights of the week will be that I will get to see my sister Nisa Islam.  I've spoken to her briefly since the transition of her two sons, Idris and Khalifah, but I will be able to actually see her and give her a big warm sisterly greeting from the Western Region.
The other is that on Thursday morning, the same day as the panel I'm on, Shirley Sherrod, the unjustly ousted USDA worker, will address context and consequences at 8 a.m.
Well, gotta go.  I'm still in current week writing deadlines and my train leaves in an hour!
Peace.
Posted by Charlene Muhammad at 6:45 AM