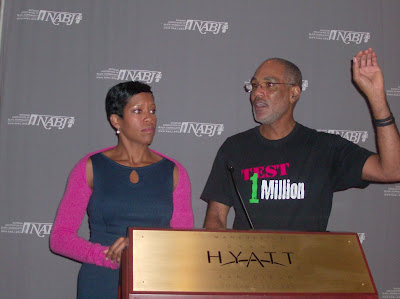 Actress Regina King and Phil Wilson, Exec Director of the Black AIDS Institute.
I had a very high regard for Shirley Sherrod, the USDA worker who was fired after a tea partyer falsified videotape, the NAACP condemned her along with Fox, and she was fired by the Obama Administration in this 'post racial' society.
After seeing/hearing her today in person that regard has climbed tremendously.  She appeared as an uncoached, genuine, sincere sister who cares about the rights of her people and of all people. She was unwavering in telling the NABJ that part of the problem is that many in the Civil Rights movement wanted to shield the young from the pain and suffering of that time and as a result, many people today don't know their history.
She also said another problem is that people are just so afraid!  Afraid to do what's right, but God knows what's right she said and right will win in the end.
I KNOW THAT'S RIGHT!
She said Pres Obama needs to reexamine what happened to her because the entire media wasn't to blame.  That rests with Fox in terms of media, and his administration in terms of it letting Fox dictate how he will govern.
When she asked her supervisor what's wrong/why was she being fired, she replied that she would be the subject of Glenn Beck that fateful night.
Breitbart/they had to know he was targeting me, she said.
More facts:  she will file a lawsuit!!! and she has not even read the 'job offer' which was in a draft form she said. She also said when asked about Breitbart apologizing that at this point if he hasn't she doesn't even want it.
And definitely she refuses to give an interview to Fox!!!
She's received hate mail and death threats/called derogatory names, etc.
She was pained by the NAACP's actions but said she would never do anything to diminish their value.
Darned.  Fox foiled again! in its attempt to divide and conquer - at least not all the way.  One side did take the bait.
There's so much more going on right now...
The Black AIDS Institute's Phil Wilson and actress Regina King launched the partnership with the NABJ:  Test 1 Million Campaign.
In part, the campaign's asking journalists to get tested at the convention and in their local communities and to write about the experience.  The effort is as named intended to get a million and more to know their HIV status.
I'm prepping for my panel participation on Minority Media Ownership - the Final Call's influence, relevancy, maintaining in hard times for papers and Black outlets especially, and our readership.
I was able to finally meet Syracuse University Professor Francis Ward, one of the founders of the NABJ, who is the facilitator of the panel.
One thing that's clear to me as I enjoy fellowshipping with other Black journalists is that there is no paper like the Final Call Newspaper!!!! I already knew that but it's good to say it:  it's good to be free.
THANK YOU HONORABLE MINISTER LOUIS FARRAKHAN for this blessed opportunity to serve in this capacity.
Posted by Charlene Muhammad at 12:37 PM