Sisters Night Out with Adai Lamar and 102.3 Radio Free KJLH 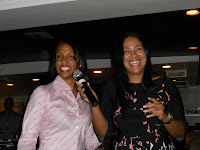 If tonight was duplicated in any measure across the country, then despite some of the poor reviews that critics gave filmmaker Tyler Perry’s adaptation of Ntozake Shange’s award winning play “For Colored Girls Who Have Considered Suicide When the Rainbow Is Enuf,” opening day will be a big number one hit on Nov. 5.

I needed to unwind after a long day of work and school with my children, so I went to join KJLH morning drive host Adai Lamar and her guests (approximately 200 of them!!) at Berri’s Restaurant in Marina del Rey for her Girls Night Out and Book Club/Movie Night highlighting the film.

The ambiance at Berri’s is nice and the owner, Marlo, is a young Black woman.  The food looked great but I didn’t have any.  And the energy among the sisters was very, very high, yet very smooth and mellow, too.

They were excited to win the movie passes, book, journals, and beautiful, life-sized posters of our beautiful and talented sisters featured in the film, but I think they enjoyed most being able to tell their own stories. 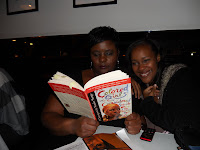 Adai started the discussion by asking how they felt being referred to as ‘colored girls’ back in the day.  Some had no problems with it.  Others brought it up to today and referenced the ‘N’ word.  Some preferred Black over African American, and vice-versa.

Then Adai struck a chord when she raised the issue of shadism in the Black community and how in our own communities, we cause a lot of hurt and pain with the light skin/dark skin nonsense that we keep up. A lot of it came from loved ones who loved us and really didn’t know any better and that they were causing any damage.

I had to jump in there because I grew up in the south and remember a classmate that was genetically impaired because her mother married her first cousin to keep the color in the family.  I was a very little girl then but that stuck with me, like, dannnnnnnnnggggg!  Some cold stuff! 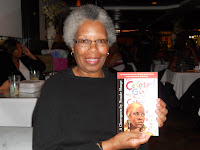 Some people I've talked to in anticipation of the film said they are on guard for a lot of Black male bashing but I have to note that Tyler Perry said he actually wrote in a positive male character to balance that out.

I couldn’t stay long but I’m so glad I went.  Adai set it off as she does every morning on KJLH Radio.  The discussion about the film actually began last Saturday during her show “Free Talk,” and it carried over to tonight.

The photos I took above are of Sis. Adai (beautiful inside and out) and Berri's owner Marlo; mother and daughter Ghia and Amber Johnson, who were reading Ntozake Shange’ book on site; and Jean Perry, one of Adai's lucky winners.

I'm looking forward to seeing the film for myself.

Posted by Charlene Muhammad at 11:07 PM