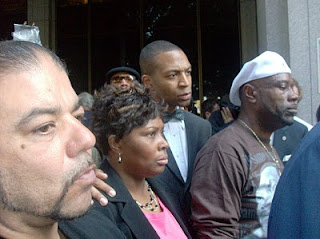 The family of Oscar Grant is making their way now to speak to the press about the bail hearing of Johannes Mehserle, the former BART officer who shot and killed their son on News Years Day, 2009.  A jury convicted Mehserle of involuntary manslaughter, with negligence for using a gun; Judge Robert Perry overruled the jury, threw out the gun enhancement, and sentenced Mehserle to two years, the minimum.

Today his attorney requested that he be sent home on bail and Grant's uncle, Cephus 'Uncle Bobby' Johnson, just told the Final Call in an interview from court that bail was denied!

They are making their way to a press conference with supporters but here is his full statement to the Final Call:

The biggest thing is that no bail was granted.

We were surprised there was no argument on the issues that he was a threat to society or a flight risk.  After the shooting he fled to Nevada and he has had incidents of excessive force before.

Also it was not brought up in court about his record, that he has been represented for excessive force.  Those two weren’t considered, but the judge (Robert Perry) didn’t grant bail because I actually thought that he knew those were realities, that Mehserle’s a flight risk because he has run before.

It lets me know that he is one of the first police officers that will go into the prison as an inmate, and not as a guard or a policeman.

It doesn’t take away our pain of the fact that he only got about six months, but we understand too that as far as history is concerned, its a small step in the right direction.

Wanda’s (his sister and Oscar’s mother) sentiments are, for a brief, brief moment right now, she’s smiling concerning what happened today but she is still in pain.  We just had Thanksgiving, and Oscar wasn’t with us.

What’s next for the family:

Of course, we are pursuing the Department of Justice and will do whatever we can to bring leverage and push for moving the process forward.

We are also taking a look at some of the judicial issues concerning Judge Perry himself, which include his failure to give the correct jury instructions and the way he handled the case from beginning to the end.

Posted by Charlene Muhammad at 2:08 PM