My last interview with Teena Marie 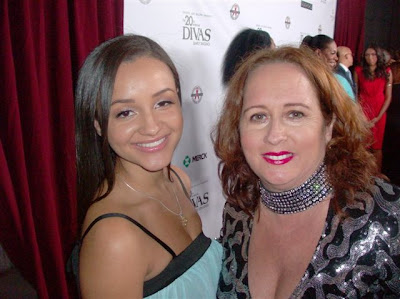 I have a lot of memories of Teena Marie and like many, I love her music and I really loved the smooth way about her.  I love cleaning up to her music but mostly I used to skate to her songs a lot.  My favorite Teena Marie song is "I'm Gonna Have My Cake (And Eat It Too)."

My mother just called to tell me that she had passed away at age 54 and I thought, it just can’t be true!  I just saw her. I just hugged her.  I just interviewed her!

On October 11, my daughter, Ra’eesah and I were at Sheryl Lee Ralph’s 20th Annual “Divas Simply Singing!” which she created in 1990 as a memorial tribute to many of her friends in the entertainment industry, which were passing away left and right.  Teena appeared with her beautiful daughter, Alia Rose on the red carpet. They both performed that night.

Before I interviewed Teena, she gave me the warmest greetings of peace, “As Salaam Alaikum, Sistah!”  But you know Teena’s soulful rhythm.  It actually came out like a song.

As she was just in the middle of answering my first question, her red carpet escort began to rush her into the theatre but she insisted on completing her answer for me.

I asked Teena specifically what she thought was contributing to the rising infection rates of HIV/AIDS among our women and girls and what she thought could be done to curb them.  We only got halfway through my intended 3 question interview, but I’ll always cherish the audio with her soulful voice on it and I thank Allah for granting me the time.  Teena replied:

“It just makes me so sad because women, mothers are our future and really the strength of all families, whether it’s Black families, White families, whatever, just the awareness on a family level.  I think some people just ignore things and it just really, really can’t be ignored because a lot of people probably don’t know that.  A lot of people probably don’t know that it affects African American women more than anyone else.  You know what I’m saying?  So maybe if they’re not conscious of that, they’re not really thinking about it like, ‘It’s going to hurt me or whatever.’  Our women are our future. As Salaam Alaikum.  Nice to see you.”

Rest In Peace dear sister Teena Marie and May Allah be pleased with you and be with your family now and always!

Posted by Charlene Muhammad at 10:12 PM

Wow As Salaam Alaikum. How are you Feeling Sis Charlene. I First saw her Live at the Funk Festival In LA. Hmmm 1979. Since then i have loved, listened, & skated to the smoothness Of A beautiful woman and Singer. Thank you for sharing your Memories.