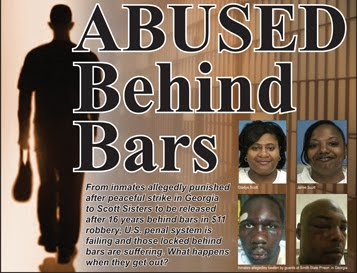 Ever since thousands of inmates in several prisons across the State of Georgia staged a peaceful strike to raise awareness about and forge a change in their inhumane living conditions and treatment behind bars, they have been retaliated against, according to a coalition that formed to support them in their quest for better treatment, access to loved ones, proper nutrition, and healthcare, among many other things.

During one of their visits, a fact-finding mission comprised of the Concerned Coalition to Respect Prisoners' Rights found that the inmates were fed bologna sandwiches for several days straight, and some of them were beaten, put in isolation cells, and many were transferred to undisclosed locations.  The Coalition is reporting that there are more abuses and new charges of beatings, and they will appeal to state and prison officials for more access to the inmates.

The Coalition is scheduled to hold a press conference outlining their request in Georgia, tomorrow.  Here's is the full press release, which I received moments ago.  (Beneath the press release are the links to three recent articles I wrote and co-wrote for the Final Call regarding the strike, dubbed "Lockdown for Liberty!"

Find us on Facebook.com

The Concerned Coalition to Respect Prisoners’ Rights, formed to support the interests and agenda of thousands of Georgia prisoners who staged a peaceful protest and work strike initiated early last December, will host a press conference this Thursday.  The mothers and other family members of Terrance Dean and Miguel Jackson, inmates reportedly brutally beaten by guards at Macon State and Smith State Prisons in connection with the strike, will be in attendance.

The press conference follows reports of violent abuses of these men and others and the findings of fact by Coalition delegations after visits to two prisons in December.  These reports have increased fears of the targeting of and retaliation against inmates on account of their peaceful protest for their human rights and raise the urgency for immediate reform.

“These new developments have increased our fears and our legitimate call for more access to inmates,” said Elaine Brown, Co-Chair of the Concerned Coalition to Respect Prisoners Rights.

Ed Dubose, Coalition Co-Chair and president of the NAACP of Georgia, stated, “Family members are frantic and mothers are crying and anguished after learning their loved ones have been badly injured. We cannot allow those cries to go unanswered.  Since the start of the December 9 peaceful work stoppage and appeal for reform and respect for human rights, some inmates have been targeted and others have simply disappeared. We are urging the Department of Corrections and Governor-Elect Nathan Deal to act now to halt these unjust practices and treat these men like human beings.”

Black, brown, white, Muslim, Christian, Rastafarian prisoners, including those at Augusta, Baldwin, Calhoun, Hancock, Hays, Macon, Rogers, Smith, Telfair, Valdosta and Ware State Prisons, joined a peaceful work stoppage December 9, 2010, refusing to come out of their cells as part of a petition to the corrections department.

Among concerns expressed by inmates were not being paid for their labor; being charged excessive fees for basic medical treatments; language barriers suffered by Latino inmates; arbitrary, harsh disciplinary practices; too few opportunities for education and self improvement; and unjust parole denials.

Coalition leaders attending the press conference will be Mr. Dubose, Ajamu Baraka of the U.S. Human Rights Network, Pastor Kenneth Glasgow of The Ordinary People Society, Chara Jackson of the ACLU of Georgia, along with Abdul Sharrief Muhammad of the Nation of Islam.

The prisoners have been petitioning the corrections department for their human rights, including wages for labor, decent health care and nutritional meals, a halt to cruel and unusual punishments, and an end to unjust just parole decisions.

"Locked down, exploited and mistreated"

Posted by Charlene Muhammad at 2:14 PM