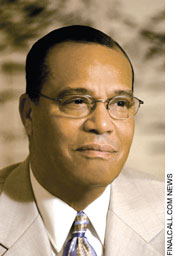 The Honorable Minister Louis Farrakhan will hold a press conference on Thursday, March 31, 2011 at Mosque Maryam, the international headquarters of the Nation of Islam located at 7351 S. Stony Island Avenue in Chicago, Illinois at 1:00 p.m. Central Time. (6:00 GMT)

Minister Farrakhan feels compelled to deliver a word of guidance and warning during this time of upheaval and trouble.

Minister Farrakhan watched with great interest and concern along with millions across the globe, President Barack Obama’s March 28 address from the National Defense University in Washington, D.C. He has also followed the recent comments of the Obama administration officials and advisors.

The press conference will be shown live via internet webcast at http://www.noi.org

All media are invited to attend and directly ask questions of Minister Farrakhan. Doors open for Media setup at 11:45 a.m.

For those media organizations interested in coverage, please go to www.finalcall.com/press