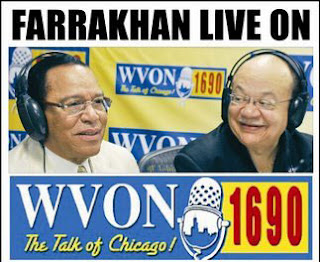 The Nation of Islam
For Immediate Release
October 25, 2011
Contact: Richard Muhammad 312 480 9775
E-mail: straightwords4@yahoo.com
Farrakhan Speaks on death of Libya’s
Muammar Gadhafi on WVON-AM today
On Tuesday, October 25, the Honorable Minister Louis Farrakhan, of the Nation of Islam, is scheduled to discuss the recent killing of Libyan leader Muammar Gadhafi and Western action and policy toward the North African country on the Cliff Kelly Show over the airwaves of WVON-AM 1690, Chicago's Black talk radio station, between 4 pm and 6 pm Central Time.
The media is invited to attend and submit questions to host Cliff Kelley for Minister Farrakhan to address on-air. Interview requests are also being accepted at this time. Accredited media should arrive by 3 pm to be in place for the live radio broadcast. The WVON studios are located at 1000 East 87th Street Chicago.
WVON radio airs on the web @ http://www.wvon.com
A round table discussion of U.S. policy and developments in Libya will follow from 6 pm to 7 pm, and include noted activists, Pan Africanist and human rights  advocates. The media is invited to attend. After the segment with Min. Farrakhan, the on-air panel discussion about Libya will include Abdul Akbar Muhammad, international representative of the Nation of Islam; Zaki Baruti of the Universal African Peoples Organization; Ali Baghdadi of the Arab Journal; Conrad Worrill of the National Black United Front; and activist Pat Hill of Black People Against Torture.
--30--
Posted by Charlene Muhammad at 2:10 PM