MGT-GCC VANGUARD ON A MISSION!! 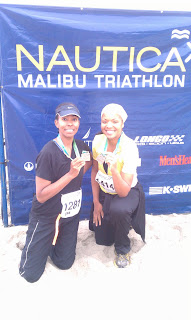 Tiffany Muhammad and Lissa Muhammad are citizens of the National of Islam and attend Muhammad Mosque #54 in Los Angeles and #27 in Compton, respectively. Both were blessed to attend the 2011 M.G.T. and G.C.C. Vanguard Retreat in Bloomingdale, Illinois September 8-11. The following week, they also participated in the 25th Annual Nautica Malibu Triathlon on September 17-18. They were among 1,300 women and girls who attended the Vanguard Retreat to train and elevate in their divine mission to become the women of God. While in Malibu, California, they summoned that training to help them complete the triathlon event course, which consisted of a half-mile ocean swim, 18-mile bike ride and a four-mile run. Their efforts combined with more than 5,000 athletes to help raise $1.1 million for pediatric cancer research. The dedicated wives and mothers shared with me their triathlon experience and the impact that the Vanguard Retreat bore on their ability to complete the course. I found such inspiration in their efforts. I pray that you do too!! 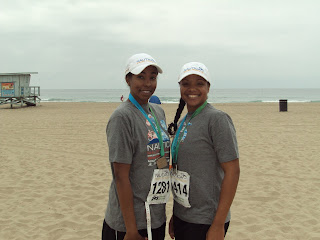 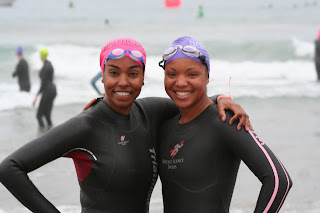 On September 17, 2011 sister Lissa and myself were blessed by Allah to finish the Nautica Malibu Olympic Distance Triathlon. This Triathlon consisted of swimming .9 miles (in the ocean), biking 24 miles and running 6 miles. This experience was extremely, physically vigorous and exhausting. In my opinion ultimate endurance challenges like the Triathlon are more of a mental challenge as opposed to a physical challenge. Obviously, you have to physically train your body and build up the stamina. However, mentally, you have to have the confidence that you can be successful. Your mental focus is the outcome determinative.

This is where being a M.G.T. and G.C.C. Vanguard gains the advantage.

Allah would have it where I was still spiritually miles “high” off the Vanguard Retreat experience. This sealed the deal mentally for me. At the retreat, we were reacquainted with the purpose of our class. As the Honorable Minister Louis Farrakhan has taught us, “Vanguard is the warrior class of the M.G.T. and G.C.C. The forward group in protection, defense and security of sisters.” I left the retreat feeling as if I was “born again.” To feel like you have a divine purpose is the most exhilarating emotion. Therefore, mentally I had already finished the race before the sound of the gun shot off to begin.

I know for an actual fact that I would have never been able to finish six marathons and now a triathlon if it were not for the teachings of the Honorable Elijah Muhammad. This divine revelation makes explicit that human beings must eat to live and keep their bodies active to prolong their lives. Brother Jabril Muhammad told me that the Honorable Elijah Muhammad once stated that, he (the Honorable Elijah Muhammad) wished that the sisters were in shape well enough that they could run from his house to the airport. That has always motivated me. The rewards and satisfaction earned from challenging yourself mentally with physical activity are plentiful. Personally, it helped me focus to finish a Master’s degree, a Law degree and much more.

As a M.G.T. and G.C.C. Vanguard, I strive to be righteous, supremely disciplined and supremely physically fit. The Minister’s passion in his talk with the Vanguard at the farm and during Sunday’s address was so lifting, I feel like I can do anything. 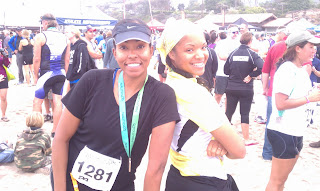 This experience extended the spiritual high that I had coming off the Vanguard Retreat. After hearing the Honorable Minister Louis Farrakhan speak the previous weekend, I felt renewed. In the days leading up to the 25th Annual Nautica Malibu Olympic Distance Triathlon, I experienced a level of strength, confidence and PEACE (especially during my ocean swim) that I was NEVER able to achieve during the time I spent training leading up to this point. This was NEVER to be done as an act of vanity. I submitted all that I had to Allah, which in turn left NO DOUBT in my mind that He would be with me every step of the way. This is what helped me push through and endure. I bear witness that Allah answers him who praises Him! Allah was definitely (and continues to be) at the forefront of this Vanguard's thoughts and actions!!

I began running in 2005 after giving birth to my third child (I am the mother of two girls and two boys). I've run 5Ks (3.1 miles) to marathons (26.2 miles) and just about everything in between. Just 3 years ago on my 30th birthday, I ran my first marathon. I have completed four marathons to date. The next year in 2009, I bought my bike as another birthday gift to myself. I didn't learn how to swim until March of this year (AFTER I had already signed up and agreed to participate in this event with Sister Tiffany).

This is my and Sister Tiffany’s first triathlon, but NOT my last! I'm already looking for our next one!! I thank Allah for Sister Tiffany and her soldier spirit for inviting me to come along with her on this journey and all of our family and friends who helped support us and sent their warm words of encouragement and congratulations. May the Peace and Mercy of Allah be with you all!! I pray that our experience will inspire others to join us in the future. 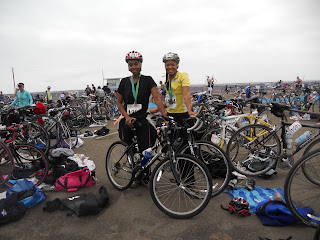 ALL PRAISE IS DUE TO ALLAH!!!

SO PROUD OF YOU MGT VANGUARD!!!