Farrakhan Speaks: 'The Time and What Must Be Done' 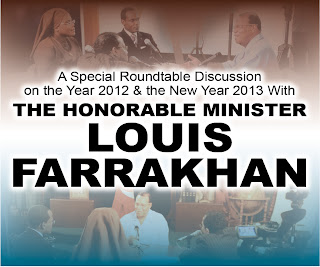 CHICAGO (Finalcall.com) - In a wide-ranging year end interview, the Honorable Minister Louis Farrakhan offered analysis of the year that was and insight into what is to come in 2013. He also announced an historic 52-week series of messages, “The Time and What Must Be Done,” which will officially begin January 12 and be available via the Internet, YouTube, cable access television, radio and on DVD.

Among the issues and topics addressed were concerns about the misuse of entertainment and culture, the serious implications of the popular movie Django Unchained in the current racial climate, rising violence in a society spinning out of control, challenges facing President Obama, international affairs and the Nation of Islam minister’s continued effort to reach Black youth.

Min. Farrakhan, in answering a question, encouraged single Black mothers to stand firm on solid spiritual and moral ground in raising their sons. Meanwhile, he said, the efforts to remake Black men properly to care for their women and children must be dramatically increased.

“The New Year should be a time of deep reflection and commitment, praying that God will help us go through this year and bring us safely into the next,” said Min. Farrakhan, in a New Year’s Day roundtable discussion conducted by the editor of The Final Call, assistant editor Ashahed Muhammad, and staff writer Starla Muhammad at the newspaper’s offices.

“We intend for the next 52 weeks to deal with the subject that was given by the Honorable Elijah Muhammad, The Time and What Must Be Done. The Honorable Elijah Muhammad finished his time among us with a series of lectures called the Theology of Time. And we in this time want our people to understand that time is the yardstick that judges our actions,” said Min. Farrakhan.

“If we understand that we are supposed to be free men and women, then we must not act as slaves, that as the Honorable Elijah Muhammad taught me is not good subject and verb agreement. We are in the present and our actions should not be of the past mentality of a slave who sits around begging others, ‘give me,’ ‘give me,’ ‘give me,’ ‘give me.’ No. I’m free now; let me do something for myself. But you (America) should help us—because we gave you all that we had, 310 years of chattel slavery, 150 years as a free slave. We built the economy of the South that fueled the industrial revolution of the North. We fought in every war that America has had, not for our freedom, but for America’s freedom and for the freedom of others who came to America and found the American Dream and built it on the nightmare of Black existence. It’s time now for the Black man and woman to realize it’s on us to make a future for ourselves, and our children and our unborn generations. And I will be doing everything I can in this year to provide that guidance but I am telling you as the Qur’an says, ‘By the time surely man is in loss, except those who believe and do good and enjoin one another to truth and enjoin one another to patience.’ The time will judge our actions and if our actions are not correspondent to the time we will continue down the road of intense regret over great loss.”

The full interview will be available on Saturday, January 5, at 6 p.m CST at http://www.noi.org/thetime.

Posted by Charlene Muhammad at 8:45 PM