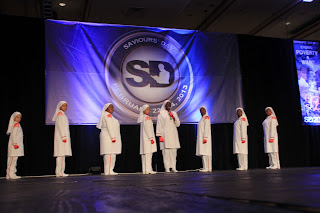 When the little chocolate drop - Akeila Ra'eesah Mariam Muhammad - was born, and all while I carried her, I prayed she would be a mini-me in terms of her loving Allah (Master Fard Muhammad), His Christ (The Honorable Elijah Muhammad) and their Messenger, Last Guide, Last Warner, Last Chance (The Honorable Minister Louis Farrakhan) to us in the world today.  And I prayed she would be a strong participant in and contributor to our Nation, whatever that meant for her. 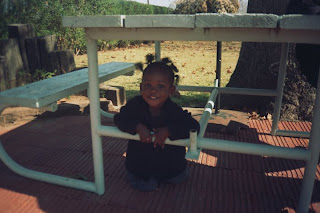 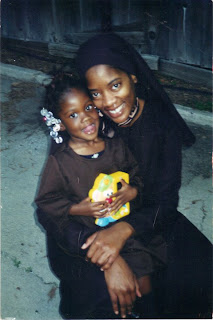 Thank Allah those prayers are being answered in my lifetime.  Ra'eesah is doing well in her MGT studies.  She's finding her light in Islam.  And she and other Jr. MGT-Vanguard at Muhammad Mosque #27/Los Angeles have braved the deep waters of the Saviours' Day Drill Competition and survived! LOL. 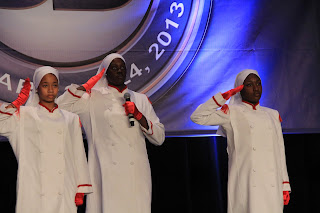 This year they wanted to participate and the budding squad, who'd only ever drilled together for all of about 2 months, and with the staunch backing and support of their parents, Student Western Region MGT-GCC Captain Arisah Muhammad, their drill instructor Sis. Valerie Muhammad (and her default /lol/ assistant Sis. Angelita Muhammad), Student Vanguard Lt. Khalillah Muhammad, and the MGT Class, they went for it and worked hard.

They prayed, practiced and produced!! 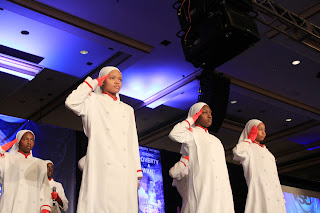 Though typically very shy (her friends would say 'yeah, right!') the jr. sisters chose Ra'eesah to be their DI (drill instructor), and Dezja Muhammad as the 2nd DI.  Although Dezja's mic malfunctioned for pretty much all of the drill, she still came strong with the voice.   Also, did you know:  these sisters have a mean stomp but their boot heels were rubber so the thunder didn't really carry throughout the ballroom? tra--aa--gg--eee-dy the comedian says - lol. 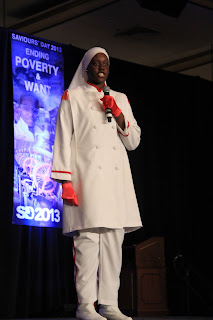 I was very nervous when it was time for them to take the stage.  But for naught.  They did it.  They completed their mission and ranked 3rd place in the fiercest military drill competition in the land:  the Nation of Islam's Annual Saviours' Day Drill Competition.

Congratulations to all of the drill teams, MGT and FOI.

And Congratulations to Raeesah, Dezja, Kaliyah, Lexi, Makkah, Nisa, Khairah, Asia (And Aatallah - Didn't make it to SD but There in Spirit)!!!!!!!!!!!!!!!!!!!! As the Honorable Minister Louis Farrakhan says we should do: you wanted something; you envisioned it; and you went to work to get it.

All Praise Is Due To Allah!  May He bless you to carry your experience with you throughout your lives. 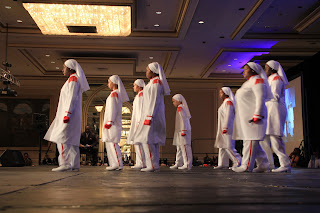 Thank you Brother Hannibal for supporting and sharing - Always!!!!

Posted by Charlene Muhammad at 11:00 AM